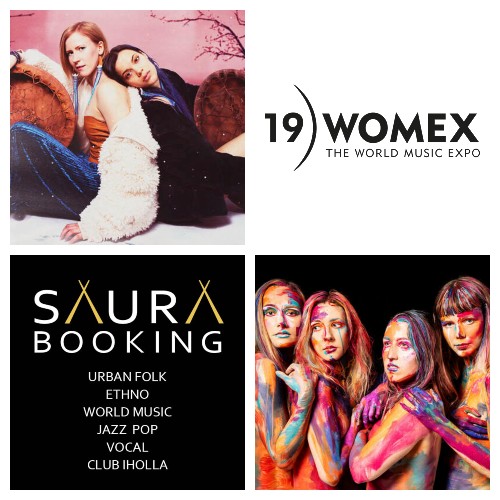 WOMEX The World Music Expo celebrates this year its 25th anniversary and arrives for the first time in Finland, Tampere on 23rd – 27th October 2019.

Among a fascinating line-up of showcasing artists from all around the world, Saura Booking Agency will represent two internationally succeeded acts, VILDÁ and Tuuletar. Both artists are signed with the award-winning independent record label and publisher Bafe’s Factory.

Tuuletar is a vocal folk hop group that creates  a vivid sonic landscape of beatbox rhythms, other-worldly harmonies, art pop and global folk influences. In 2016 Tuuletar gave an exclusive radio concert in WOMEX  for the EBU Live Sessions, hosted by NRK and BBC. At WOMEX Tuuletar will perform on the regional stage titled Northern Connections. The stage will showcase musical talent not just from the Nordic region but also from neighbours near and far from Estonia, Lithuania, and others.

The Arctic Fire – Pohjoiset tulet opening concert will introduce VILDÁ, a duo that is a blend of indigenous Sámi yoik, detailed rhythms and improvisation, inspired by present-day pop and the Sámi people’s close connection to nature. VILDÁ’s debut album was released in April (Bafe’s Factory) this year the duo tours in Spain, France and Canada.